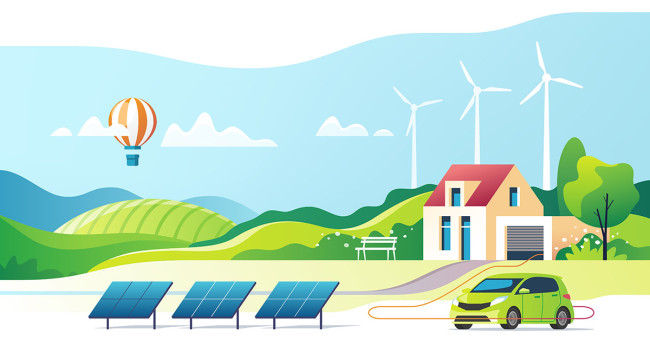 Advantages of Wind Energy For You

The fact that the world needs forms of renewable and clean energy is no secret. Fossil fuels pollute, are environmentally damaging, and running out fast, so we need alternatives. Of all those being developed - solar, hydro, geothermal - none, perhaps, has more potential than harnessing the power of the wind to produce the power we need.

Wind power, via wind turbines and wind farms, has already made a vital contribution to our energy needs. The windmills of our forebears have been transformed with modern technology into the electricity behemoths that are helping to power the grids of countries all over the world.

But what are the advantages of electricity produced by wind power and, indeed, are there any disadvantages?

The advantages of wind power are many and compelling, some obvious, some less so. Let's look at them in more detail:

Lacks pollution
There are two major disadvantages of using fossil fuels for our energy.
One is that they are a finite resource and will simply not be available to us in perhaps as little as 70 years.

The second is more unfortunate: the huge amount of pollution their use produces. Particulates, carbon dioxide, nitrogen oxides and sulfur dioxide lead to many health, environmental and economic problems and are the chief cause of greenhouse gasses, smog and acid rain. Wind energy doesn’t produce emissions.

Renewable
The wind will never run out. The technology will improve, and the current wind turbines may be superseded by more even better units, but the wind will always be there. The source of wind power is inexhaustible.

The fact that it is clean and renewable is why it is the main choice of renewable energy we purchase for our customers. Are you ready to join the Inspire movement and switch to renewable energy?

Cost-effective
With a free energy source, land-based wind turbines produce some of the cheapest electricity on the planet. According to the Office of Energy Efficiency & Renewable Energy, just 1-2 cents per kilowatt-hour (kWh) [1].

Space efficient
Wind turbines are getting both larger and more efficient while maintaining a similar footprint. The current generation are each capable of providing enough power for 600 typical US homes based on electricity generated in only one year of use. These bigger turbines do have to be more spread out, but the land between can be used for other things such as food production. For this reason, they may be even more efficient than solar farms.

Industrial and domestic machinery
The first wind turbines were small and intended to power just one farmstead or off-the-grid home. That variation of scale is still evident today with wind turbines of all sizes and power production capacities being manufactured. This means that power can be generated even in remote locations.

Low operational costs
In general, once erected and commissioned, wind turbines require little in the way of maintenance. The technology might be sophisticated, but the mechanics are straightforward and reliable.

Low operational costs will lead to lower electricity costs for the consumer, as more people adopt it. Are you ready to make the switch to 100% renewable energy sources?

Job creation
Wind energy production is a fast-growing industry, and more and more jobs are being created to service it. Design, manufacture, installation, maintenance and support mean that it is estimated that some 600,000 jobs will have been created by 2050. Already, more than 100,000 people are employed in wind power production in the US.

Prices are decreasing
As technology improves, so electricity produced by wind production gets cheaper. The last 40 years have seen prices tumble, and while that may not continue at the same rate, the trend is downward for the foreseeable future. 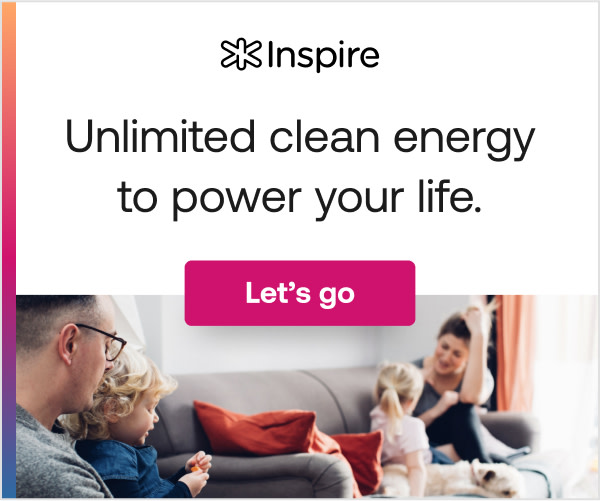 No sort of energy production is entirely problem-free, and there are three aspects of wind power production that cause concern.

Noise and aesthetics
There is no denying that wind turbines produce noise, and if you live near them, this may be a problem. The sound they produce can travel, some estimate up to 2 km [2], but they aren’t any noisier than a busy highway and aren’t situated near populated areas. The sound will also carry depending on the direction of the wind that day, and if there’s no wind, there’s no noise.

Aesthetically, it has been argued they are not attractive to look at, but compared to the extensive damage mining and fracking causes, this should be a minor concern.

Wind farms built at sea nearly eliminate both of these negatives, and this is becoming more common.

Impact on local wildlife
There have not been enough studies to be sure, and figures for the US could be anywhere from 20,000 to more than 573,000 birds are killed every year [3]. By comparison, between 797 million and 5.29 billion birds are killed by domestic cats and other human activities, and 599 million birds die by flying into buildings in the US alone.

Even though the impact of wind turbines on birds is less than pets and skyscrapers, scientists and researchers are continuously working to reduce, and ideally eliminate, the impact on birds and other wildlife.

Wind fluctuation
Another disadvantage of wind power is that wind is not constant. In fact, it fluctuates both in strength and direction. Today's technology, including computer control, helps immeasurably as does the sophistication shown in where to site wind turbines and farms.

Technology such as anemometers that automatically measure speed of the wind provide wind speed and direction measurements through the turbine help reduce wasted wind. Those measurements are then used to rotate and fine-tune the direction the turbine faces to directly face wind and generate the most energy as possible.

When the ability to store electricity improves, this will become much less of a problem, and the use of other clean and renewable energy sources can help maintain clean energy at all times. Of course, placing wind farms in high-wind areas also helps negate this negative.

Wind turbines generate energy with propeller blades like those on an aircraft. The movement of the wind causes the two or three blades to rotate. By a system of shafts and gears, that energy is used to spin a generator, so producing electricity.

How big a wind turbine do you need to power a house?

Typically, a US home uses about 10,766 kWh of electricity in a year, so a 15kWh wind turbine would be required to make an appreciable difference to your power needs depending on local wind strength.

You can switch to a clean energy company like Inspire to take advantage of the benefits of renewable energy, wind power, and other renewable energy sources without any costs or space needed to install your own personal wind turbine. 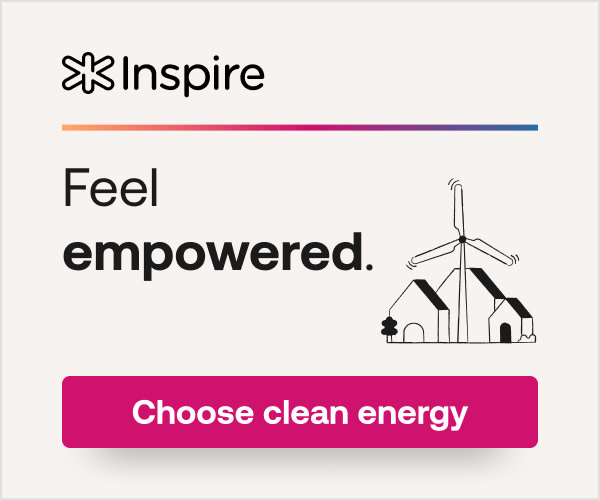 How much energy does a 1.5 MW wind turbine produce?

A wind turbine rated at 1.5 MW produces, given the wind, something around 3,285,000 kWh per year, enough electricity to power 500 homes in a year. That is the energy equivalent of over 2390 barrels of crude oil!
1.5 MW to 2 MW turbines are pretty much the industry standard at the moment for wind farms.

How much energy does a wind farm produce?

That depends on the number of turbines and their rating. Globally, the cumulative wind capacity grew from 2000 to 2010 from 17,000 MWh to greater than 430,000 MWh. It continues to grow year on year. In 2019 the US Energy Information Administration estimates that a further 12,200 MW came online

How tall are wind turbines?

Turbines vary in height, but a standard 1.5 MW wind turbine typically has a hub height of about 70 meters, with rotor diameters of between 65 and 77 meters.

How much do wind turbines cost?

A 2 MW turbine for a commercial wind farm works out at being $3 - $4 Million by the time it is commissioned, though they make their value back quickly.

If that price tag seems like a tough pill to swallow - there is a much easier way to utilize clean energy from wind power and other renewable sources. Consider switching to renewable energy with Inspire today to start working towards a cleaner future together, today! 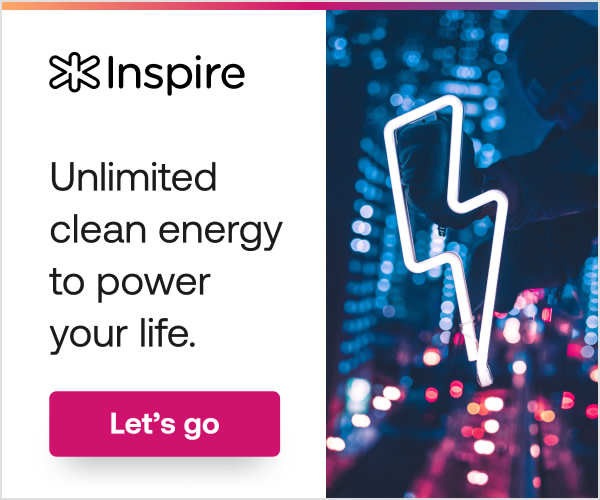 How many wind turbines are there in the US?

According to the American Wind Energy Association [4], as of the beginning of 2018, more than 54,000 wind turbines were helping generate electricity across the country (plus Guam and Puerto Rico) with enough capacity to supply over 27 million homes.

Wind power is increasing globally, particularly in the US and China. In 2019, according to the Global Wind Energy Council [5], its capacity rose by nearly 20%, a staggering 60.4 gigawatts, and it isn’t slowing down.

There are wind energy pros and cons, but wind energy produced has many advantages and few drawbacks and is one of the biggest and most important sources of clean, renewable energy. The technology is improving daily, and wind energy is set to be of growing strategic value to our energy supplies for years to come.

If you want wind energy to power your home, but can’t or don’t want to invest in a wind turbine for your property, don’t worry – there’s a much easier way! Simply join us in our fight to protect the planet and make the switch to renewable energy. 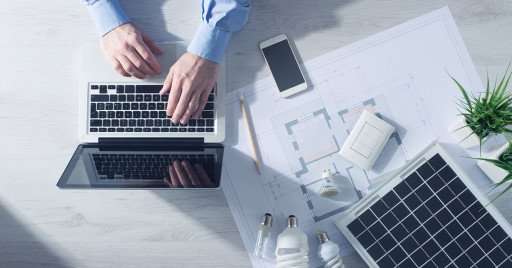 Learn the best ways to save energy in your household 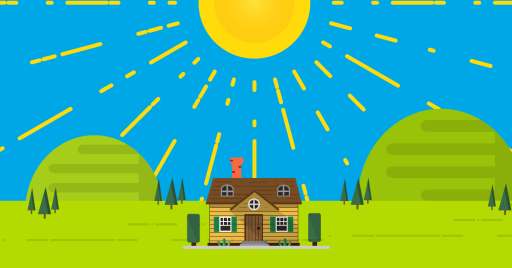 The Impact of Net Zero Homes 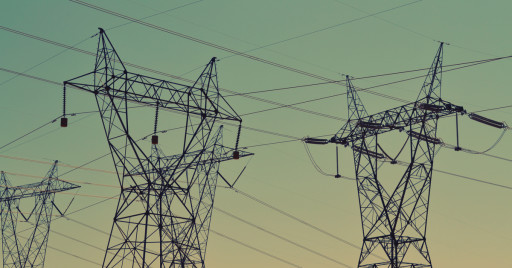