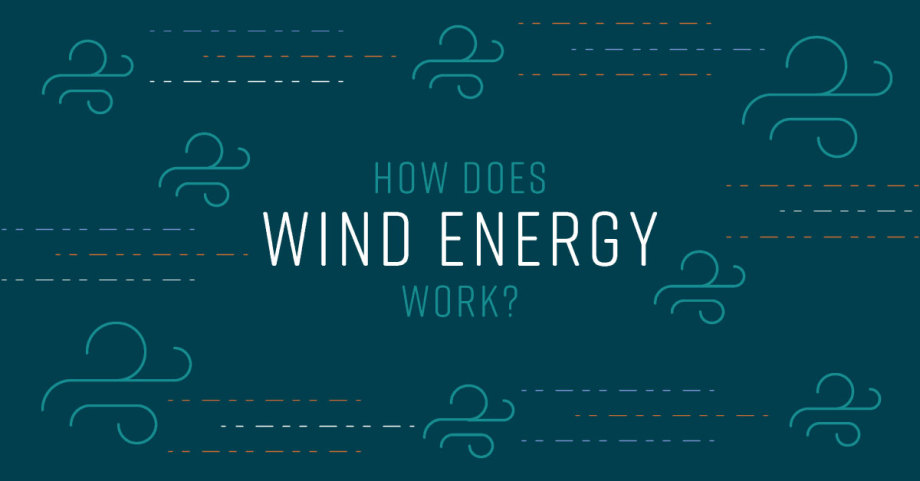 Since the dawn of time, wind has been noted as powerful natural force. In fact, nearly every ancient religious system featured a deity or supernatural entity associated with wind.

It's no wonder, then, that humans have found ingenious ways to harness wind's considerable physical energy. From the ancient sails of very early civilizations in India, Egypt, and the Near East, to today's utility-scale wind farms, wind is potent source of clean, natural energy.

So, what are the benefits of renewable energy like wind? Unlike the fossil fuels that people have relied on since the Industrial Revolution, wind is not a finite resource. It's impossible to run out of wind, and its use doesn't release as much of the environmentally damaging byproducts associated with petroleum and coal processing. Starting with the oil crisis of the 1970s, wind has been one of several clean energy technologies at the forefront of a movement to decrease reliance on fossil fuels.

How does wind power work?

Wind power is one of our best natural resources, and we’re only just beginning to utilize it to power our world. While humans once used it to power windmills to make flour, we can now use it to generate electricity to power our modern world. But what exactly is wind energy, and how does it work?

Since wind power is the number one type of clean energy we purchase for our members, we’ll guide you through everything you need to know about wind energy and how it’s used.

How is wind energy produced?

The most common modern method of harnessing wind energy to generate electricity is the use wind turbines.

A turbine is a rotary device that extracts energy from the motion of a fluid – in this case, the gases that make up our atmosphere – and converts that energy into useful work.

Imagine a fan, but reversed. Instead of using electricity to power a fan’s blades, a wind turbine uses the power of wind to generate electricity. The spinning blades turn a shaft that connects to a rotor. This action is what produces electricity.

What’s the science behind wind energy?

The size and design of the wind turbine varies and will determine how much electricity it can generate.

In a wind turbine, blades serve to rotate a generator shaft, which produces electricity. Turbine blades are designed with a carefully calculated curvature to help them capture as much wind as possible. The kinetic energy from the spinning blades, caused by the wind, turns the central drive shaft.

In the presence of wind, a small area of low-pressure air forms on the downward side of the turbine blade. This low-pressure region draws the blade toward it, providing lift that exceeds the wind's drag against the front of the blade. Because wind speeds are higher and less turbulent above ground than at ground level, most utility wind turbines are mounted 100 feet or higher above ground. Ideal locations for wind farms experience relatively consistent wind speeds of about 16 – 20 MPH.

Small turbines are often used to provide off-the-grid power. (You may have seen these on top of billboards recently, where they provide electricity to light up the sign at night.) Much larger turbines are used to generate energy for the power grid. Wind farms consisting of a few hundred turbines can power an entire city.

Inside the main body of the turbine, called the "nacelle", the blades themselves can only turn the shaft at around 16 RPM. This speed isn't sufficient to provide electricity to a power grid, so rotating gears in a gearbox component convert this slow motion into 1600 RPM, turning the drive shaft quickly enough to generate electrical power.

The main application of modern wind farms is to generate usable electricity for a regional power grid.

The size, design, and rotor diameter of a wind turbine will determine how much power it can generate. Turbines have a designated rated capacity, based on how much power they can produce under optimal wind conditions. For example, a 2 kW turbine will produce 2 kWh of electricity per hour. A typical turbine is designed to function best at wind speeds of around 11 – 15 meters per second. Of course, wind speeds can vary significantly, so wind turbines usually produce about 10-40% of their rated capacity.

What is a wind farm?

A wind farm is simply a collection of wind turbines placed in a strategic place to capture the most wind energy. Generally, this will be out at sea, high up on a hill or mountainside, or on a flat open plain. A wind farm can be just a few turbines, or a few hundred. It just depends on the facility.

As wind turbine technology is continuously refined and improved, and more wind farms are constructed, wind power is expected to grow in importance. By 2030, the US Department of Energy plans to expand wind power to 20% of the nation's total generated electricity. This clean, environmentally friendly source of energy remains one of the most important alternatives to fossil fuels.

What is wind energy?

Wind energy is simple – it’s electricity generated by harnessing the natural power of the wind. Wind energy can be used to power a single property, such as a home or business that is too far away from the national grid to be connected, or generate power for the national power grid that supplies us all with electricity.

What are the benefits of wind energy?

How does wind energy work?

Wind energy is produced by the use of wind turbines. How do wind turbines work? Whether on a small or large scale, they use their blades to capture the kinetic energy of the wind to make them spin. Once they’re spinning, it turns a generator shaft inside the turbine, which powers a generator, which makes the electricity.
On a small scale, wind turbines can power a single property, but on a large scale, they contribute their electricity to the power grid. Fortunately, it’s absolutely possible for your home to be powered by wind energy, even if you live in an apartment! When you join Inspire, we’ll purchase your clean wind energy for you so you can get the peace of mind knowing you’ve made a huge move toward bettering the planet. Switch to renewable energy today!

How efficient is wind energy?

Very! In fact, a large wind turbine, like that you’d see on a wind farm, can generate enough electricity in a day to power the average family home for a year! That’s 365 days of energy, and no harmful waste produced. The best thing is, wind turbine technology is getting better all the time, so things will only become more efficient from here.

When you make the switch to renewable energy with us, we’ll help you power your own home cleanly, and get even more clean energy into the national power grid.

The more RECs that are purchased, the more valuable clean energy generation becomes, leading to more production and more renewable energy on the grid.

The more RECs purchased, the more valuable clean energy generation becomes, which leads to more production and more renewable energy on the grid.

RECs are what we purchase on behalf of our customers to supply them with clean energy. If you’re ready to make the switch from harmful traditional energy to clean energy, click here to get started!

What happens when I switch to clean energy with Inspire?

We purchase renewable energy certificates from local, regional and/or national wind farms on your behalf to offset the energy that you consume every month.

Your utility company will still deliver the energy to your house, read your meters, and send you your bill. We are listed as the supplier and there is nothing else you have to do.

Your home or business will actively support more clean power getting into the grid without needing to change your lifestyle. It’s as simple as that!

How can I switch to wind energy with Inspire?

Easy! All you need to do is follow our simple steps to sign up. Once you’ve told us you’re ready to switch, we’ll take care of the rest. We’ll let your utility company know you’ve joined us and start purchasing clean energy for you. It literally only takes a few minutes, and then you’ll be doing your part to save the planet! Will anything else you do today be so impactful than switching to a clean energy provider? Are you ready to switch to renewable energy?