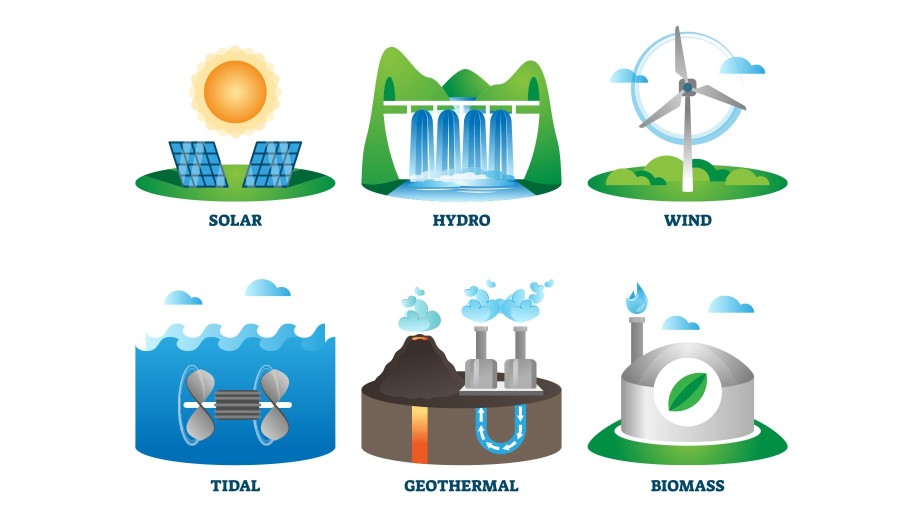 What are the main sources of renewable energy?

But what are the different types of renewable energy sources, how do they work, and are they really all that beneficial?

What are renewable energy sources?

What are the five most common sources of renewable energy?

The 5 main sources of renewable energy are:

How do the different types of renewable energy work?

As one of Earth’s most abundant resources, it is no surprise that sunlight is commonly utilized to generate power, both commercially and domestically.

Photovoltaic (PV) systems capture the energy produced by solar rays within their cells which is then converted into electricity and heating.

The amount of solar energy that can be used depends largely on geographical location, the season of the year, and the time of day.

Wind is another plentiful clean energy resource, harnessed using turbines. When wind blows by the turbines, it causes the blades to rotate and in turn produce electricity.

Wind power is often used on a large scale to power a number of commercial properties or used on a smaller scale to supplement other energy sources. It can also be used on a domestic scale, although not every home will be suitable for this.

A large reservoir is created with a dam that can be used to control the flow of water. This flow of water causes a water wheel to turn, which leads to the generation of electricity.

Hydro energy can also be harnessed using the natural flow of a river, known as run-of-river hydropower. This method uses a narrow channel to funnel the flow toward a water wheel rather than needing to build a dam.

The electricity created can be stored for later use if demand has already been reached and hydro energy is generally more reliable than both solar and wind energy as it can be used 24/7 in any weather condition.

Tidal energy is another form of hydro energy, using the ocean to generate power. The twice-daily tidal currents work to drive turbines connected to generators, which, although not constant, is very predictable. This means that the amount of energy produced during each tidal current can be easily estimated, and power stations can compensate for low tide currents when needed.

Tidal energy is particularly useful for towns and cities located near the coast as this energy can be harnessed for the local population without any trouble.

Geothermal energy is harnessed from heat that has been trapped underneath the Earth’s crust either since its formation or due to radioactive decay. Some of this heat will escape naturally in large quantities, typically in the form of a volcanic eruption or geyser, but it can also be captured manually to produce geothermal energy.

This type of energy can also be used on a smaller scale to heat homes directly using a geothermal heat pump.

Biomass is organic matter that is typically a by-product of recently living organisms and plants, and can be converted into a solid fuel made of plant material or methane gas.

This solid fuel, not including wood, is burned in order to produce electricity, which may not be a particularly clean process, although it is cleaner and more energy-efficient than it has been in the past.

Methane gas, produced through anaerobic processes during the natural decomposition of organic matter, particularly in water bodies and landfills.

Biomass energy can be produced at particularly low costs, both in an economical sense and an environmental sense, as it involves the conversion of agricultural, domestic, and industrial by-products that would otherwise be wasted.

What are the benefits of renewable energy sources?

The benefits of renewable energy sources include the following:

What is the best source of renewable energy?

Solar energy is particularly popular for both commercial and domestic use as it is efficient and effective, with an efficiency of 15% to 20%, and it can significantly lower your electric bills.

Wind energy is even more efficient than solar energy, averaging around 35%, although this can reach up to 50%. The main issue with wind energy, however, is that you need enough space to be able to erect one or more turbines and somewhere that gets a good, regular flow of wind.

How to use renewable energy at home

As mentioned above, there are a number of renewable energy sources that can be utilized at home, although they may not all be a viable option for your property.

In order to use solar energy for electricity and/or heating, you can purchase PV panels that can be installed on your roof or another suitable location of your property. These will work to generate electricity during all daylight hours, although they are more effective during sunnier weather. Any surplus power can be stored in batteries for later use, although these batteries can be pretty expensive. Solar energy will work to improve the sustainability of your home and cut down your electric bills, but the initial installation can come at a very high cost.

You could opt to install a small wind turbine on your property to generate a percentage of your electricity, either installed on the roof of your home or as a free-standing pole. This will help to reduce your electricity bills, although you will find wind energy more beneficial if your geographical location is more susceptible to high winds.

If you are looking for a renewable energy source to provide heating and hot water for your home, you could choose to have a biomass system installed. This burns organic materials, such as wood pellets, so it is not a totally clean energy source, although it does produce lower levels of carbon than fossil fuels.

While these are all great options, the easiest and cheapest way to support renewable energy in your home is by switching to a green energy plan, such as our unlimited renewable energy plan. Inspire members get all the benefits of using renewable energy sources, but without the need for a huge amount of space, upfront cost, or potential unknown costs.

Why are renewable energy sources important?

The continued development of renewable energy sources is crucial to combating climate change and working to reverse the effects of global warming as much as possible. Working toward a completely renewable power market is the most reliable way to ensure that our environment is protected for the future.

What isn’t a renewable energy source?

Renewable energy sources are important for providing us with the power we need without causing harm to the environment. A renewable energy company such as Inspire allows you to sign up for 100% clean, renewable energy for a flat monthly rate so that you can help in the fight against climate change, without having to cut back on your usage. Visit Inspire to find out more about how to switch to renewable energy in less than 5 minutes.