Why are Greenhouse Gases a Problem?

Don't worry about climate change— do something about it.

Our clean energy plans are the easiest way to reduce your home's carbon footprint.

What do people really mean when they talk about reducing global warming? What are greenhouse gases and why do they threaten the environment? There are so many different terms and opinions out there that it can be difficult to understand everything surrounding greenhouse gases. Read on to get the answers to the most common questions and understand fully why greenhouse gases are a problem.

What are greenhouse gases? 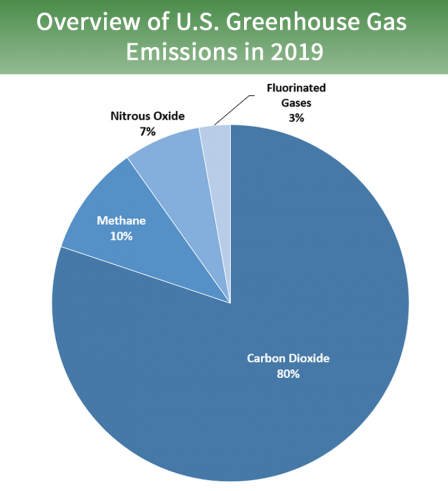 Carbon dioxide exists naturally as a trace gas in the Earth’s atmosphere. Although CO2 concentrations in the air fluctuate naturally with the seasons, anthropogenic factors like fossil fuel combustion and widespread deforestation have increased the quantity of carbon dioxide present in the atmosphere, with negative climatic and environmental effects.

Since the time of the Industrial Revolution, atmospheric CO2 concentrations have increased by a worrisome 43%. On a global scale, this is a significant change. Human activities emit 29 billion tons of carbon dioxide each year, and most of this derives from the burning of fossil fuels for energy.

Carbon dioxide is a problem because it acts as a "greenhouse gas." Due to its molecular structure, CO2 absorbs and emits infrared radiation, warming the Earth’s surface and the lower levels of the atmosphere. This leads to a positive feedback cycle: as temperatures increase due to atmospheric CO2 levels, CO2 levels increase due to the warming temperatures.

Why are carbon emissions a problem?

Over the last 150 years, human activity has brought the amount of carbon dioxide in our atmosphere to levels that have not been seen for hundreds of thousands of years. The magnitude of this impact is immense. Humans today have so much impact on a global scale that most geologists, ecologists, and natural historians maintain that we have entered an entirely new geological epoch, known as the Anthropocene.

Ongoing scientific research has made it increasingly clear that it is in humanity's best interest, as a species, to move away from dependence on fossil fuel combustion.

If you have been thinking of trying renewable energy to power your home to offset greenhouse gases, you can read the latest Inspire Energy reviews to see how we've helped customers make the switch.

How do greenhouse gases affect the Earth?

Each gas's effect on the planet depends on three primary factors:

Greenhouse gases pose severe environmental and health issues. They cause climate change by trapping heat, which in turn affects various species in already arid climates. The climate change caused by greenhouse gas emissions also contributes to extreme weather, wildfires, droughts and food supply disruptions. If our planet continues to release greenhouse gases at the current rate, the typical weather patterns will change, and some animal species will likely disappear. Greenhouse gases also contribute to air pollution and smog, which can cause respiratory and pulmonary diseases.

What are 3 causes of climate change?

Global warming occurs when carbon dioxide and other pollutants accumulate in the atmosphere. These air pollutants absorb sunlight and radiation that have bounced off the earth’s surface. This radiation would normally escape into space, but these pollutants can last for centuries in the atmosphere, trapping the heat and causing the nearby planet to heat up. These pollutants trap heat and are referred to as greenhouse gases. Their negative impact on the planet is known as the greenhouse effect.

What is the largest contributor to greenhouse gases?

Here in the US (and in most other areas of the world), the biggest contributor is the burning of fossil fuels. Everytime you use gas in your car, natural gas in the kitchen, or flick a light, you’re likely using a fossil fuel. If you look around you, it’s likely most of those things were made with tools or processes that used fossil fuels, too. Every time we burn a fossil fuel it releases more harmful gases that contribute to the greenhouse effect.

If you want to contribute less to this issue, there are two important actions you can take. First, switch your home’s electricity supply to a 100% green clean electricity plan. Inspire helps its members do just that in many states around the country. If you want to see if we can help you, click here.

The other option you have is to use eco-friendly transport. While switching to an electric vehicle is the best option, it’s also the most costly and not always practical. If your lifestyle allows for it, consider switching to a vehicle with a high MPG (miles per gallon) will help you save money and get further on less fuel.

How serious is global warming?

Each year, we discover more about the consequences of global warming through evidence of its worrisome impact on the planet and its inhabitants. Climate change causes heatwaves, fires, droughts, and floods, and as they become more frequent and dangerous, people and animals suffer.

Why are carbon emissions a global problem? If we don’t reduce our global emissions, climate change could result in the deaths of over 250,000 people globally and annually. These devastating effects will likely also force 100 million people into extreme poverty by 2030. In countries that already have high levels of suffering and poverty, this could have disastrous effects that we cannot afford to risk.

When did greenhouse gases become a problem?

In the 1980s, the world’s annual mean temperature curve began to rise, increasing so steeply that global warming became better known as a theory. Environmental NGOs (Non-Governmental Organizations) began advocating global environmental protection to curb further global warming. Global warming soon became a hot news topic that was repeated all over the world. It may be surprising that this information became public knowledge so late, but before then, the idea of global warming was simply a theory. Shockingly, it wasn’t until June 23, 1988, that climate change officially became a national issue.

How can we solve global warming?

Pretty much every sector of the global economy, from agriculture and manufacturing to power production and transportation, contributes to releasing greenhouse gases. To avoid the worst effects of large-scale climate change, all of these sectors must shift away from fossil fuels. The changes are vital for the biggest emitters, with twenty countries causing around three-quarters of global greenhouse gas emissions, with the US, China and India in the top three.

We already have the technology needed to reduce greenhouse gas emissions. These changes would entail boosting energy efficiency in warehouses and industrial factories, swapping fossil fuels for renewable sources and discouraging carbon emissions by charging companies for releasing them.

How can humans reduce the level of greenhouse gases?

As we explored above, the main culprits of greenhouse gas emissions are large corporations, but we individuals are responsible too. Reducing our global carbon footprint requires everyone to make a small effort, but thankfully, it’s relatively easy to do your bit to solve global warming.

Here are some ways you can do it at home:

At Inspire Clean Energy, we believe that all energy should be 100% renewable as soon as possible. We know the strain the planet is under, and we want to lighten that load by providing access to clean and affordable energy. Click here to make the switch to clean energy today.

Don't worry about climate change— do something about it.

Our clean energy plans are the easiest way to reduce your home's carbon footprint.

We're on a mission to transform the way people access clean energy and accelerate a net-zero carbon future.

Together we can power a greener future