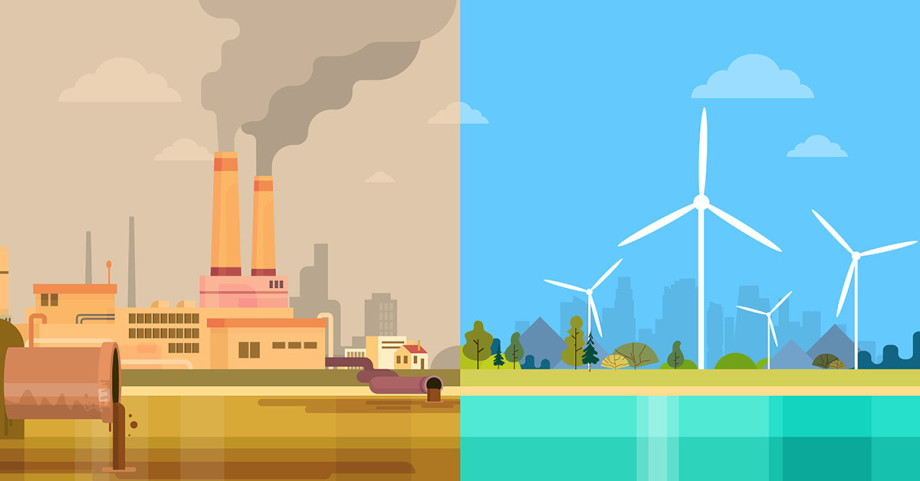 Wind energy is one of the most commonly used sources of renewable energy today, but what are the wind energy pros and cons when it comes to sustainability?

What are the pros and cons of wind energy?

We love wind energy because it’s so good for the planet, but we know not everyone is so well informed. So, let’s explore some of these frequently asked questions about wind energy.

How is wind energy used today?

Wind energy is harnessed through the use of wind farms. But what is a wind farm exactly? And how does wind energy work? Wind farms convert the wind’s naturally existing kinetic energy to electrical energy, using the aerodynamic force from the rotor blades. That, in turn, is what we use to power everything in our lives that requires electricity.

Solar and wind energy for homes are two of the most sustainable and environmentally friendly sources of energy, and they are intrinsically linked. Interestingly, wind energy actually wouldn’t exist if it weren’t for solar energy. Wind exists due to the sun unevenly heating the surface of the Earth. As hot air rises, cooler air moves in to fill the void. So it makes sense that, as long as the sun continues to shine, the wind will continue to blow.

What are some of the pros of wind energy?

So, what are wind energy pros and cons? Let’s start with the pros. Not only is wind energy better for the environment, but it’s also safer, cheaper, and saves billions of gallons of water every single year. Here’s why we love the benefits of wind energy1:

What are some of the cons of wind energy?

While there are a lot of pros to wind energy, there is one reason why wind energy may not be the only source of energy we use just yet:

How do wind power turbines work?

Turbines are used to transfer spinning energy into electric energy. The spinning turbines create power that is sent to an electrical generator to transform the energy. Wind turbines work exactly like other turbine technologies. For example, a hydroelectric dam will use water to spin turbines. A nuclear power plant will split atoms to heat water, which creates steam to spin turbines. The same kind of technology is used for a wind turbine, however, instead of water or steam, it is the force of wind that spins turbines. Generators are the point of contact between the renewable energy station (wind farm, power plant, etc.) and the transmission wires that guide electrical currents to where it is most useful. So, now that we know the pros and cons of wind energy and how wind turbines work, what are the pros and cons of the wind turbines?

What are some of the advantages of wind turbines?

What are some of the disadvantages of wind turbines?

How do wind turbines affect the environment? Are windmills harmful?

Windmills are entirely harmless for the most part. The only concern that has been consistently voiced about wind turbines is that of harming local nature and wildlife.

The National Wind Coordinating Committee (NWCC) did find that bird and bat deaths due to collisions with wind turbines occurred and that air pressure changes caused by the large spinning turbines resulted in habitat disruption.

Despite this, the NWCC concluded that the overall impact was low, and there was no significant threat to any species or their general population. So, this has not proved to be a common problem; because wind turbines are usually spaced so far apart, most of the land can still be used as normal.

How long do wind turbines last?

The average wind turbine can last anywhere from 20 to 25 years, depending on how well they are maintained and what kind of environmental conditions they are exposed to. The cost of maintenance increases as the turbine gets older, so at some point, it might be better to simply retire a wind turbine and place a new one in its place. Wind turbines are designed to safely withstand wind speeds of up to 55 miles per hour. Any speeds greater than that and the wind turbine will be shut down temporarily until wind speeds have reduced. A wind turbine that is placed in an area where wind speeds regularly hover above 45 meters per second or that are exposed to extreme weather conditions on a fairly regular basis may not last as long as a wind turbine in a more gentle environment3.

Where is wind energy most used?

So, which states produce the most wind energy? Surprisingly, the nation’s wind energy leader is Texas, which is known as the oil state. There are over 150 wind farms in Texas, with a total combined rated capacity of 30,000 MW4. One MW is equal to one Million Watts. To understand how much wind energy is produced in Texas, keep in mind that one MW of traditional coal-based energy can power up to 650 average homes.

Wind energy accounted for 21% of the total electricity generated in Texas. They lead the U.S. when it comes to wind energy employment, with 24,000 people employed in the wind industry. Following Texas, the top 4 U.S. states for wind energy production are Iowa, Oklahoma, Kansas and Illinois5.

Of course, that doesn’t mean you need to be in those states to benefit from their wind farms. Wind farms all around the country are generating clean energy for the national power grid, and so when you join Inspire and switch to renewable energy, you help more of the nation’s power come from these renewable energy sources.

Is wind energy increasing in the U.S.?

Wind energy in the United States is continuing to grow year-to-year, however, due to some of the drawbacks of wind energy and its constant competition with other energy sources, growth has been slower than it could be. That being said, growth of wind energy use in the United States still has been dramatic. In the year 2000, wind energy generated about 6 billion kilowatt-hours. In 2020, wind energy electricity generation increased to about 338 billion kilowatt-hours. That is an increase of around 5,633% in the last 20 years6.

That is a significant increase in wind energy production, but it is important to note that even with that dramatic increase in the last 20 years, wind farms only accounted for 8.4% of the total U.S. electricity generation in 2020. As wind turbine technology continues to become more advanced and the cost of producing energy from wind decreases, there are many predictions of an increase of total U.S. electricity generation over the next decade.

It certainly is — it’s an almost-free source of energy to harness and an efficient source of energy for the home. Energy sources like fossil fuels are inclined to fluctuate in price, depending on what is available and how much it costs worldwide. Wind energy, however, is a lot steadier cost-wise and can be offered at fixed prices over much longer periods of time. In the long run, wind energy will help energy prices come down. Our members that have switched to renewable energy are helping future-proof our energy grid and prevent price hikes by utility companies.

How is wind energy sustainable?

Wind energy guarantees longevity as wind itself will never run out or even deplete. And the best part is that the average life of a wind turbine is between 20 and 25 years making it an efficient piece of equipment to build and generate energy over a long period of time. Unlike most conventional sources of energy, wind power cuts pollution, saves the use of billions of gallons of water a year, and reduces carbon emissions.

All of these factors combined make wind energy an excellent candidate for the cleanest and most environmentally friendly way of sourcing energy, as well as being truly sustainable. As mentioned before, wind energy does not require any water to cultivate; therefore is essentially drought-proof. This factor is especially pertinent in areas of the country that are prone to droughts, such as Nevada, Idaho, and California. It is more important now than ever to have an awareness of the effects of each energy source and make a change accordingly.

Wind turbines create power without the use of fossil fuels, which is an absolutely vital part of what makes wind energy so suitable for the environment.

It’s never been easier to reduce your carbon emissions and make an impact on the planet by accessing renewable energy for your home. Switch your electricity supply to a 100% clean energy plan sourced from wind and solar for one flat monthly price. Switch to renewable energy today – the planet will thank you.