What is Green Energy? 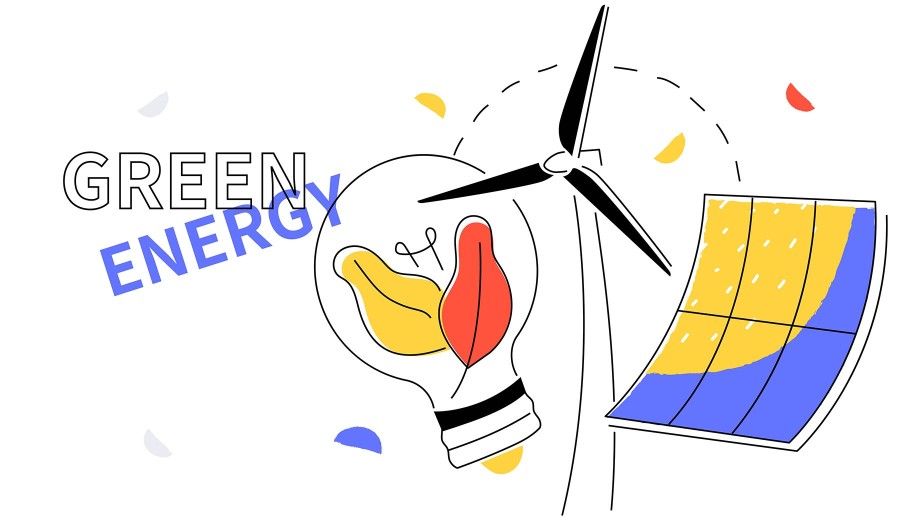 The benefits of green energy and why it matters.

Let's start by looking at the definition of green energy; then, we'll explore its benefits and much more.

What does green energy mean?

Green energy is a term for energy that comes from renewable sources. Green energy is often referred to as clean, sustainable, or renewable energy. The production of green energy doesn't release toxic greenhouse gases into the atmosphere, meaning it causes little or no environmental impact.

Why is it called green energy?

Green energy got its name because it comes from natural resources provided to us by the Earth. The color green is often associated with health, nature and sustainability, so it makes sense that renewable energy is related to the color that embodies nature.

What is green energy and how does it work?

Green energy comes from natural resources like water, wind and sun, which provide the energy we turn into electricity.

Let's take a closer look at each green energy source and how they work:

What are the benefits of green energy?

For many people and organizations, green energy's main draw is that it's less harmful to the environment. Green energy sources like wind and solar power are superior options for avoiding harmful greenhouse gas emissions. While installing wind turbines on homes may not be possible, we can choose utility providers that supply green energy.

Green energy is also better for our physical health as it is far less responsible for polluting our air and water. According to the World Health Organization, household and ambient air pollution causes 4.2 million deaths around the world annually. Most of these deaths occurred in low- to middle‐income countries, especially Southeast Asia and the Western Pacific regions1.

For this reason, we must focus more on renewable energy sources that cause less damage than their unsustainable counterparts, especially in less affluent countries.

Another advantage of green energy is that the naturally occurring resources used to harness this renewable energy will not deplete over time. Solar power is available as long as the sun continues to shine, wind energy is possible as long as the wind is blowing, and hydropower will exist as long as lakes, streams and rivers continue to flow. Each resource's consistency and reliability depend on the location; for example, the U.S. is better suited to generate solar power than other countries that receive less direct sunlight. Similarly, windy areas such as plains and the coast will likely yield better energy generation results for wind farms.

What are the drawbacks of green energy?

Although the last few decades have seen exponential growth in renewable energy use, some drawbacks to green energy need to be considered.

Here is a breakdown of some of those disadvantages3:

Even though green energy is needed for the future, plenty more work is required to make renewables our primary energy source.

What makes an energy source green?

What is the cleanest source of energy?

Wind is the cleanest energy source, as it reduces our reliance on fossil fuels and the amount of dangerous CO₂ that pollutes the air.

Unlike other forms of renewable energy, wind power does not require much external input. For example, wind turbines do not need water to produce electricity, so using them instead of thermal power plants saves billions of gallons of water each year. Last year, wind energy generation decreased water consumption at existing power plants by about 103 billion gallons. Wind turbines are also one of the only energy sources we can install and maintain offshore. Offshore wind farms provide an invaluable opportunity to harness powerful maritime winds without disturbing nearby residents.

While direct pollution is important to note, it's also worth remembering the indirect ways energy sources can cause pollution. For example, geothermal energy is a sustainable resource creating renewable energy, but some energy is required to harness that energy, which may come from nonrenewable sources. One could also factor in the emissions created while employees travel to their worksite, assuming they are using gas-burning modes of transportation.

Nuclear energy can be considered green energy because it produces zero greenhouse emissions during energy production and operation. But some often question if nuclear waste and its storage can be dangerous. Nuclear waste can unleash toxic chemicals into the environment from improper storage/disposal or natural disasters (think: tsunamis or hurricanes). Also, some forms of nuclear waste can take thousands of years to break down to a point where its radioactivity is harmful to humans, animals and plants. For these reasons, some people are hesitant to put nuclear energy in the same category as wind, solar and hydro. But, if you are looking strictly at the numbers, particularly the amount of greenhouse gases it produces, then it can be considered green energy4.

An advantage of nuclear energy is that it produces large quantities of energy from a relatively small amount of land. A nuclear facility in the U.S. that produces 1,000 megawatts of energy needs about one-square mile to operate. A wind farm would need 360 times more space to have the same energy, and a solar plant would need 75 times more. Another advantage of nuclear power is its energy efficiency due to its highly dense output5.

What is the best source of green energy?

Why do we need green energy?

Green energy is essential because it produces little to no greenhouse gas emissions. Reducing greenhouse gas emissions will lower air pollution and help curb the devastating effects that fossil fuels have on climate change. Green energy also allows us to diversify our energy supply while reducing our dependence on imported fuels. Investing in green energy also produces jobs, especially for our next generation of workforce6.

What is a green energy plan?

Green energy is energy created from natural sources. Therefore, a green energy plan is what residents use to access renewable energy at home. As an Inspire member, you can get access to clean energy for one flat monthly price. By simply signing up at Inspire, you have the power to make a difference. Various energy companies can offer different plans. You will need to find a provider in your area that offers a green energy plan that works for you.

Is green energy right for me?

Green energy sources are far better for the environment, so if you're interested in using resources that are healthier and longer-lasting, green energy is undoubtedly right for you.

Resources like wind power are also getting cheaper each year. One U.K. renewable report estimated that electricity generated from onshore wind or solar power could be supplied at half the cost of gas-fired power plants by 2025. This cost reduction often means that utility providers can offer customers fixed prices on energy for up to 25 years, hedging against fluctuating fuel costs7.

So, what does all this mean for consumers?

The growth of wind energy means more accessible clean energy for the masses. For consumers, it means steady and predictable prices and the knowledge that we are doing our part to reduce the need for environmentally harmful energy sources.

As an Inspire member, you can access clean energy for one flat price while reducing your home's carbon emissions.

To get started, visit our homepage and enter your address and/or ZIP Code. If Inspire's clean energy supply plans are available in your area, you can proceed with linking your utility and discover the beginning of consistent and predictable monthly energy bills.